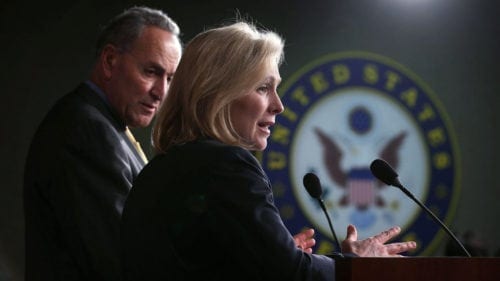 A stunning new poll conducted by a longtime Clinton insider may spell disaster for the Democrats heading into the 2018 midterm elections; revealing a whopping majority of Americans are opposed to abolishing the Immigration and Customs Enforcement agency.

The survey -conducted by Democratic pollster Mark Penn- shows most voters are in favor of stricter border controls, think those arrested while in the United States illegally should be sent back to their home countries, and largely support ICE agents enforcing federal law.

“Penn polled the newest progressive immigration proposal, the ‘Abolish ICE’ campaign to disband U.S. Immigration and Customs Enforcement. Sixty-nine percent of those surveyed (78 percent of Republicans, 59 percent of Democrats, and 73 percent of independents) said ICE should not be abolished, while 31 percent said it should,” writes the Washington Examiner.

A growing number of leading Democrats -including NYC Mayor Bill de Blasio, Sen. Kirsten Gillibrand, and others- have called for the abolishment of ICE in recent weeks, saying the agency was “broken” and failed to represent the values of the United States.

Read the full story at the Washington Examiner.

This story originally appeared in The Sean Hannity Show

About The Sean Hannity Show